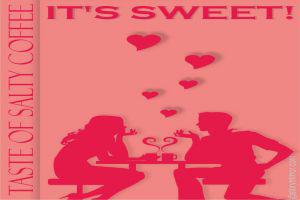 Jai saw her at a party and he felt an immediate connection with her. He wanted to see her and talk to her, and in fact, have her for the whole of his life. “I am in a dream,” Jai said to himself. “Why should such a beautiful girl like Ahana would even talk to a normal guy like me when there are so many guys chasing her.”

Though sure of rejection, Jai decided to talk to her at-least once. While the party had almost ended, he gathered courage an invited her over the coffee. Ahana was certainly not impressed but due to his genuine gesture and politeness, she couldn’t refuse him.

They met at a nice coffee shop. Jai was too nervous and wasn’t able to speak a word. A while later taking the first sip of her coffee, Ahana thought to herself that she would rather go back.

Just then, Jai asked the waiter if he could have some salt to put in his coffee! That was indeed strange. Jai’s face was almost red but it was too late to say anything and he sprinkled salt in his coffee. Ahana could not stop herself from asking him of this strange behavior. He told her that when he was a boy, he lived near a sea shore. He told her how he played with its waves and could feel the taste of sea just the way this salty coffee was.

Jai continued, “This salty coffee reminds me of my childhood, my hometown and my parents who are still there.” And while he said all this he became nostalgic, and there were tears in his eyes. Ahana was touched and she was glad to meet a person like him. She thought, if a person is so attached to his family, cares about his home and is sensitive for his parents, he surely is a responsible and an affectionate person. Eventually Ahana also started telling him about her faraway home, childhood and parents.

Jai and Ahana’s meeting was a very beautiful one and it marked the beginning of their relationship.  After this, they continued to see each other regularly. She observed that Jai was an understanding person, had tolerance and was kind hearted. Ahana was getting convinced that he was Mr. Right for her. Now she thanked the salty coffee for if it didn’t have come in their life, she would have missed him.

Time passed and they agreed to marry each other just like a fairy tale, “Happily Ever After.” They indeed lived a happy life and Ahana would never miss to make his coffee salty as she knew this was how he liked it.

Forty years passed by and it so happened that Jai passed away leaving a letter for her. It read like this, “My Love, I always loved you more than anything and the very imagination of living without you would kill me. Perhaps that is the reason God called me first. However, there was just one lie that I had told you and continued to until the last day of my life. And I ask you to forgive me for that. I lied to you about the salted coffee. Do you remember our first date? I was very nervous that day and instead of asking for sugar, I called for salt. I wanted to rectify but it was too late and I gulped down the salted coffee. I always wanted to tell you the truth but was afraid of losing you since I had promised you that I will never lie. But now I have nothing to lose and here is the truth. The fact is that the salted coffee doesn’t tastes well at all. However, since I never regret doing anything for you, I happily drank it all my life. Having you was the biggest happiness for me. In fact, if I have to live with you yet another life at the cost of salty coffee, I will happily accept it. Yes, my love for you has only increased with time and perhaps knowing you more is only a source of achievement for me.”

As she completed reading the letter, her eyes were filled with tears and the letter was completely wet. One day someone asked her, “How does the salty coffee taste?” She replied with a smile, “It’s sweet!”