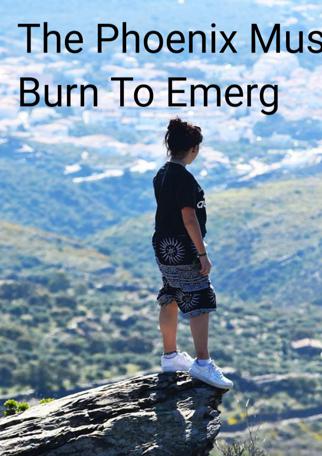 The Phoenix Must Burn To Emerge
★★★★★

The sweltering heat of summer, cloistered in the laboratory with the smell of formaldehyde emanating, clothed in my white coat working incessantly on white albino rats. They lay lifeless but were giving meaning to my work. My work which would be fruitful for mankind. Maybe not a Nobel Prize but acclamation for doing a noble deed. Seasons came, seasons went I had no time to enjoy the beauty of spring, the azure blue skies, the verdant green or enjoy then petrichor of the first monsoonal showers. My mind was occupied with just one goal to procure my doctoral degree and procure a good job in a premier research institute. December of 1992 turned to be a milestone in my life. I was awarded my degree after a four year grueling. I was ecstatic that at last I had procured my hard-earned degree. I was ready to take the world by a storm.

But it is said 'Man proposes God disposes.' My life took a different turn and I was hitched into holy matrimony. Now I started trotting all over the country with my spouse as his work entailed extensive travelling. Both matrimony and motherhood left me no time to follow my passion. I had turned into a full time homemaker, instead of breaking glass ceilings I was mopping floors and swaddling the babies to sleep.

At times I looked wistfully when I saw ladies of my age working and oozing with self-confidence. They dressed with a kind of swag which made me envy them. I had turned from glam to drab being a SAHM or a Stay At Home Mom. My academic knowledge was being used to teach my kids. My writing skills came to the fore when I helped my kids with their assignments. Two decades passed and tots turned to teens. My restless soul wanted to go out and restart my dormant career. I decided to take the plunge after a sabbatical of twenty plus odd years.

I started applying to various institutes but there was a lull from all sides for a month. Then one fine day I got a call from a premier research institute. I was on cloud nine. The dawned bright and clear wearing my confidence on my sleeve and carrying my folder containing my degrees and mark sheets I set forth to start life on a new note. Brimming with joy I was ready for the interview. But it seemed two decades had brought about a paradigm shift in the mindset of the people.

I was not fit to join the millennial tribe, the world had stepped into the 21st century where digitalisation was the order of the day. I was still in the 20th century naive to the world of technology. The CV gap of two decades made me stand out like a sore thumb. There was no place for people like me. They closed the door on me which pierced my heart and I felt forlorn. I may have cried buckets of tears on my pillow that night but the morning brought new hope.

I could not wallow in self- pity but prove myself to be a winner than a failure to this heartless world.

In the words of C.S.Lewis 'You are never too old to set a new goal or dream a new dream'. One should believe in oneself, have faith in one's abilities, confidence in one's own powers to do something in life.

I decided to take the road less traveled by as quoted by Robert Frost and that made all the difference.

My indomitable spirit urged me to take bold steps to turn my dreams to reality. My latent talent to write came to the fore. I decided to work on it and along with that learn the nuances of technology to survive in this digital world.

As they say there is no age for learning and I being the oldest student among the class of youngsters didn't deter me from my goal to become techno savvy. It was better late than never I became well versed with the nuances of technology. Now started the gruel to procure a good writing job. It seemed I had got an epiphany that writing could change my destiny. Teachers in school had seen my writing prowess and had asked me to take it as a career but I felt I was cut out for a career in science.

Now I recalled their words and decided to give it a try. I surfed the net for good writing jobs but it seemed again I had reached the dark end of a tunnel as nothing seemed suitable for me. I was bereft of any formal degree in Media & Journalism or English so I was not eligible for any job. Only having a passion to write was giving me no headway. I felt dejected but not for long as I believe in Try, Try Till You Succeed.

Then came a tailor made opportunity The Chicken Soup Series wanted submissions for their forthcoming new series and I decided to give it a try. I sent my submission with a little apprehension but on getting their acceptance I was ecstatic. Seeing my first story in print was a ephemeral moment for me.

Now It was no looking back, I started sending my stories and articles to several websites and they got published. I never received rejection which gave me a high. It was wonderful having my write ups both in print and digital media. Suddenly different platforms were giving a platform to freshers to showcase their writing skills. But there was no monetary gain only one could gain experience.

I wanted to have some monetary independence to gain back my self-confidence. Soon it seemed my prayers were answered I got a freelance work in 2014 as a proofreader in a reputed publishing house. It was a work from home job I was thrilled. After 1992 this was the first time I got an opportunity to do something concrete. It boosted my morale. Soon I ventured on the international platform. I managed to publish on three international sites. It was a moment of great joy when an editor of an international site praised my work. Now started my foray to write on national dailies and magazines.

But my dream to get a good paying job still looked a faraway dream. Soon I chanced on a site Internshala which was helping women to restart their lost careers. It looked like a silver lining in a dark cloud. I saw success stories of homemakers who had restarted their careers after a break of 5-10 years. Now I felt a bit apprehensive as my career break constituted twenty odd years. Still I registered on their site and started applying for content writing jobs.

It was like finding a needle in a haystack as I had zero knowledge about content writing. Tad a bit nervous still I gave it a try. My intuition told me to tarry a bit longer to procure something in the writing field. There was a hiatus of several months after I had filled for several jobs. I felt disheartened but not for long. A employer liked my CV and shortlisted me for a content writer post. He set me an assignment on the Padmavat controversy, a topic which had set the nation abuzz. My write up nailed the job for me.

It was the starting of a new journey working as a content writer. I educated myself on content and SEO watching YouTube videos. Soon I had mastered content writing skills and I managed to write content for several startups. While working on content a company found my academic skills worthy and hired me as their education advisor. It was a great learning experience providing tips to students and taking interviews to get a good staff for the education start up.

As soon as the tenure ended with the education startup I got an opportunity to work for an education app. I curated education content for the app. It was a period of growth. The day the app was launched it was a red letter day for me.

Soon an English teaching app appointed me to teach spoken English to people who felt I was at ease speaking English. It was a great experience teaching English through WhatsApp and telephonic conversations

The Phoenix Must Burn To Emerge