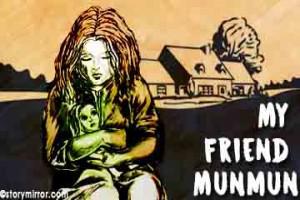 Whenever I sit and think about Munmun, I feel at a loss in understanding human relations. The trust, care and faith that comes with each of our relationships along with its outcome is what frustrates me to no end. She is nearly my age, born into a well to do Bengali Brahmin family with four grown up elder brothers, a very loving and caring mother and a drunk evil father. We played together during my visits to my maternal grandma's house. We would enjoy many an afternoon in joyful bliss, giggling, playing with our kitchen sets, dolls and organizing doll weddings with all paraphernalia including food etc. But in time I lost touch with her becasue of my school and various hobbies. All I was left with were our memories.

One day we came to know that Juthi maasi, Munmun’s mother had passed away. Soon we heard that her brothers were separated too. On one of her visits Mashimoni (my mom’s sister) and Maa were discussing something, huddled close in one corner. They just kept quiet when I asked them what they were talking about. But from a few words that I overheard, I knew it was about Munmun. I could also sense that everything things were not good with her. But as was the age, like the naughty speedy waters of a fast moving mountain stream, the concern also sped fast away from my mind.

After my class nine examinations got over, I went to my grandma’s place again and there I met Munmun, with a small little child on her hip. I was happy to see her but she didn’t look happy. She looked pale, malnourished and fragile. I asked whose child it was and she said it was hers. In a moment, I snapped back and asked her not to fool around with me but was taken aback to see her burst into tears. My maami (aunt) came running, scolded me for being rude, hugged Munmun and took her to another room. That day many of the questions my innocent heart had, went unanswered. I saw a strange kind of stiffness and helplessness in my friend Munmun. As an innocent little girl, ignorant to the ills of the world, I came to know that it was possible for a fourteen year old to become a mother. But how and why? I had no answer.

Two days later, I came to know that a local social worker, Purnima aunty had adopted Munmun and her child. People who cared for Mummun heaved a sigh of relief, that she was now in safe hands. Despite all that, I wondered why wasn't she staying with her father and if she had a child, she must be married, then who was her husband. The then innocent child in me had no idea at that time that children could be begotten without wedlock too. And no matter how and in what ways I tried to get my answers, my queries were met with cold gazes from everyone. I returned back to my life and slowly got over it. Munmun again became a hazy picture in my mind which I refused to look at since I could never join the ends of the threads of her life.

Days passed into months and into years. After twelfth class boards, I landed up at my grandma’s place again because I loved to spend time there and being the first born of my grandma's first child, I was the apple of everyone’s eyes. I enjoyed all the freedom and attention which my mom never pampered me with. It was there that I again met Munmun as a helping hand at my aunt's. I was surprised and grieved on seeing her. I was bothered by her faint sad smile and the melancholy of her countenance. Something stopped me from asking her anything and I just gave her a hug. That night my grandma (who was more of a mother, friend someone who has always inspired me and has been an important instrument in making me understand the various aspects of life), lied next to me and answered all of my questions. That day she felt that I had the right to know about my friend and also now since I was grown up, I was ready to face certain realities of life. What she told shook me bad and affected my outlook to the various relations we shared.

“Munmun was married off two years ago by Purnima as it was becoming a little difficult for her to take care of both Munmun as well as her daughter. Secondly, Purnima felt she had found a good match in the man who accepted Munmun as his wife and the child as his own even after knowing that she was raped and continuously assaulted by her father," my grandma said. I got up and looked at her in disbelief. Yes that was a reality that hit me hard on my face that day. After her mother’s death, when her brothers separated after fighting with their drunk father because of his ways, she was the one left behind with that evil man. He had tarnished all relationships, broken all trust and faith, bruised and battered the most beautiful relationship, of a father and daughter. Scared and alone, Munmun suffered the atrocities on her body and soul by the man who was suppose to be her protector but ended up being the cause of the creation of another life within his own child. She didn’t know what to do, whom to turn to. She kept to herself. It was only when neighbours started noticing the changes in her body, that they got concerned. She was still scared, but when some elderly ladies showed some care towards her, she spilled the beans. Immediately her brothers and uncle were called and told off the situation. Strangely, no complaint was lodged, no action taken against her father other than severing of ties wit the father and a social boycott.

Her husband too was no different. In fact, he had married her because he wanted to take advantage of her and her past by forcing her into things and situations she didn’t want to. Unable to bear it anymore, she returned to her elder brother. But as is the case very often now, his wife refused to take care of her and her three children. So in order to support herself and children she started working with people she knew, as their help (she never completed her school education after her mother expired). She manage to move on with great courage.

One of these women, Mrs. Rewa adopted her eldest child and took care of Munmun’s financial needs too. Thanks to her fight for survival and the generosity of others, today, her eldest daughter is educated and married. The other two children pursuing good careers too. Munmun still comes to work. On being asked by me, she tells me that she does not want to forget her roots, she does not want to forget the people who helped her every which way when she was alone. She says that she will continue to work for them as a mark of respect towards the generosity of humankind till she won't be able to do anymore.

But today as I see her, I feel perseverance pays and God isn't very unjust.

After all this Munmun's story still intrigues and confuses me when it comes to understanding human relations. YOu ask why? This same girl, went back to take care of her ailing and paralysed father on his death bed. On being questioned, she answers very piously, “Whatever he did, he carried as his karma. He suffered his part of hell here. You should have seen him suffer. He was rotting, smelly, filthy, it wasn't a peaceful death at all. And whatever happened to me must have been my karma. God willed it that way. Who am I to refuse help to a suffering human being when there have been so many who have helped, loved and cared for me and my children. At least today I am a free person without any guilt. And yes he asked for my forgiveness too, exactly before his death.”

I was dumbfounded and in awe of this female. It is Munmun who has taught me that every person in this world is a complex creature whose behavior is driven by emotions, beliefs and point of views. We carry false images of ourselves and each others and these only form the basis for all kinds of emotional reactions.

If we want to make meaningful changes in our relationships then we should always address the real cause – the images we carry in our minds of ourselves, and each other. Probably that is what she did by leaving her husband, by taking care of her father who had wronged her and by still working as a house help in the families who really mattered to her.

We don’t have to have just one self-image - there can be numerous, emotional behaviours in relationships and the way we feel about ourselves as well as others rise from these images. The vision gets confused and complicated when we try to see that the other person in the relationship has behaviors and agreements driven by their self-images. These images act as stubborn belief structures in our mind and are often difficult to see in the beginning, but as we develop awareness, as we try to connect in a different way, the vision becomes clearer and it becomes easier. Munmun had reached that state of awareness where she did not judge everything as one but made changes according to the various images.

Hats off to you Munmun! Thanks for being a part of my life, for teaching me so much and for helping me to keep on loving life.