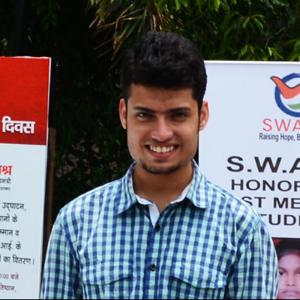 There lived a king named Amarcus The Great.

Ruled he, the magnificent Kingdom of Crete.

Noble and stern was he.

Bestowed upon with a nature, kind.

Nobody had he, but a dog called Castor,

Who was ever-ready to die for his master!

And shadow its owner,

Castor pursued Amarcus, wherever he went.

Once during his golden age,

When Crete was charged by Carthage,

And set out for a fierce encounter.

The war dragged on for days and days

And the monarch fought in rain and haze!

As nothing ought to flourish forever on mortal earth,

The mighty empire of Crete too, had to abandon all mirth.

So when Amarcus saw he had no more chance

And his throne sinking in every circumstance,

From the battlefield he shrewdly vanished,

Now that he was ultimately vanquished!

Castor, his adored kith and kin,

Then in a fist of fury,

After catching a teary-eyed glimpse of Castor,

Amarcus turned his back towards the canine.

And the dog gave a melancholy, heartbroken whine!

Born he was, to obey his master,

And no option had he ever,

But wait patiently for the emperor's return.

After treading for a long, long while,

Amarcus reached a forest, in exile.

As the calendars slowly rolled away,

And there came one fine date,

When he forgot all about his loving mate!

Was still waiting for his master in penury.

His forlorn heart was breaking,

But nobody had he to confide in!

Wishing to see his native land once more,

Left for Crete, in the garb of a beggar.

So well was he disguised

That no one recognised!

But the ruse didn't work on a sick, aged dog,

That came running blissfully from far off.

Amarcus thinking it to be a mad one,

Shooed it away with disgust and aversion.

The dog, unmindful of that,

Ran again towards his master,

With all the energy it could muster.

And after wagging his worn-out tail,

Taking the final breath of his life,

Perished down dead on Amarcus' feet.

After ruminating for a long while,

Castor, was for years, tirelessly waiting,

For this very moment, uncomplaining,

He cursed himself in despair.

And after saluting Castor proudly,

In due course, after amassing a guerrilla army,

So valiantly and firmly his men fought,

That the foes buckled under the onslaught,

He was crowned again,

Not the king of Crete,

But the emperor of Castorshire,

In the memory of his faithful friend.

And at the heart of the kingdom,

Built he a hugely extravagant

For his dear beloved Castor.

He too was royally cremated

Beside his most loyal kindred!

The poem is dedicated to my late pet-dog named Cuty (In the cover picture).

It is a tribute to Man's Best Friend - The Dog and stands as a testimony to its selfless servitude and devotion towards humans throughout generations.