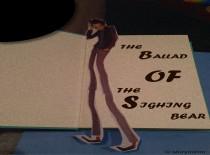 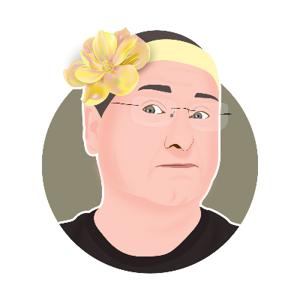 In the deep dark woods

He was seven feet tall

but the townsfolks didn’t care.

For although the bear was huge

and had fangs and long sharp claws,

all the people would make fun of him

and point out his big flaw.

Have you ever met a bear

who had nothing much to say,

who couldn’t even growl

when he came outside to play?

Well, Bob was his name

and no matter how he tried,

when he opened his big mouth,

all he managed was a sigh.

Now in a nearby village

she liked the big old bear

and they’d grown to be good pals.

She was never afraid of Bob

for she loved him well and true.

She was sure he’d never hurt her,

he was gentle through and through.

“I am going to stop them laughing”,

“They can no longer make fun

of my dear friend that way!”

So she came up with a plan,

that was certain to succeed.

When the crowd arrived,

she sneaked up into a tree.

and he raised his great big paws,

showing to all the people

he had long and dangerous claws,

from the top of her tiny lungs

as he opened his enormous mouth

The people jumped and screamed

and then ran for their dear lives,

falling over wooden fences and some buzzing bee hives.

The bees came out and cried,

“What a terrible thing to do!”

and they chased them even further with the threat of a sting or two.

as she dropped down from the tree

landing right upon his back,

how they giggled with such glee.

“I bet they'll all be hiding now

and wondering with a scowl,

where on earth did that silly bear

get his loud and fearsome growl?”

and bade her friend goodnight.

"Didn't we both give them

such a terrible old fright?

Lets do it again tomorrow

and watch them scream and run

from a poor old sighing bear,

who is really such good fun”.

The Ballad Of The Sighing Bear