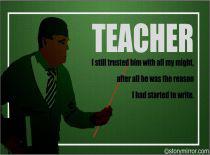 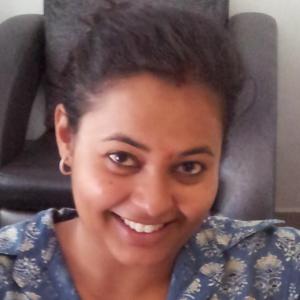 He taught me to write on many a chilly night,
When the day's work was done, and the distractions around us were none;
It did not matter that we were thousands of miles apart,
For I could have given even my arm and my leg to to learn from him his art;

Writing however was not as easy as I had thought,
It needed patience, it needed hard work, it needed me to bare open my soul and my heart;
There were nights I would not sleep a wink and days that I spent only to think,
But he was a difficult task master not to be satisfied easily and dismissed my hard work in a wink;

I tried and I tried and on some nights out of exhaustion I also cried,
This is not how I had visualized writing, it was supposed to be easy and not so daunting;
I pleaded to him to let me go, no longer did I want to be the writer everyone would love to know,
You cannot just give up he would say, work till what you want to achieve does not come your way;

I wrote and I wrote, and I wrote some more until my eyes started stinging and fingers were sore,
I could not have given up until I stood on my own and shone out in a crowd;
More than myself it was my teacher I wanted to make proud,
Praise from him however was hard to come by no matter how hard I would try;

But I still trusted him with all my might after all he was the reason I had started to write,
Somewhere along the line I needed him less and less, as long as my work he could assess;
Thanks to my teacher I could now manage to stand on my own,
A little outside the crowd, among those who for their greatness I had always known;

The nights are chilly yet again and the slanting rays of the sun have begun playing their game,
I still write all night, until just outside my window I can see the morning light;
I wonder what my teacher about my work would have said, but a blank screen stares at me instead,
They say when you no longer need someone the universe takes him away, without him however I seem to have lost my way.