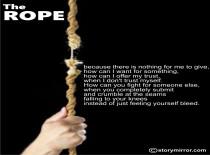 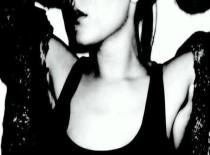 This rope you weave,
clinging threads conceived of your inexepression,
adorn your collar bones
in your own self repression,
unconsciously with both hands empty....
your left meets your right....
as the main accomplice
in your every fall
and every rise
transcending into your regression...
why do you lay down
and die in within your transgression..
instead of creating something greater,
interlaced threads of your hesitation
and resistance to speak up
with confidence and purpose....
This fiber of your inexpression,
used as restraint
rather than a tool of succession,
you choose execution of self...
instead of the execution of self expression,
your self reflection must be
so deeply buried in the trenches of your being ...
I'm tired and weary of speaking to people

in tongues hoping
you've ascended enough to translate...
Things are more prophetic than you understand,
no matter what you gave to someone like me,
I'd be uncontent living alone in my own regret,
promise, pray, repent...
not for me but for the world...
there is a hierarchy of human kind
that you often fail to recognize...
a type that could never be happy in this vessel
wearing a human mask as armor
against their own kind and kin...
Where this could be a place
love, equality, selflessness and higher learning,
it'd rather be a place of hurt , greed,
revenge, pleasure seeking, and sin...
The clock is winding down,
it's only short while
between here and the other side...
will you be more concerned with
what you are taking
rather than what you are leaving,
would you rather it kill
someone else than you...
because there is nothing for me to give,
how can I want for something,
how can I offer my trust,
when I don't trust myself.
How can you fight for someone else,
when you completely submit
and crumble at the seams
falling to your knees
instead of just feeling yourself bleed.