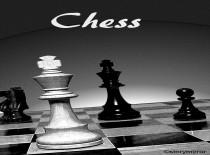 Chess is a wonderful game.
Players get name and fame.
Chess is a mind game,
Only from India it came.

It’s a game of intelligence.
Those moments of tense.
Each piece in the chess board,
Acts as your king’s hoard.

First comes the rook,
Its body is not at all crook.
It moves horizontal or vertical,
Which is quite typical.

Then we have the knight,
Which puts up a brave fight
In the endgame,
Where chances of winning are lame.

All pieces it can jump over.
It doesn’t do much of a cover.
It moves in the shape of a ‘L’
Its movements are very difficult to tell.

Then comes the bishop,
Its value steps- up
As the game progresses
And endgame advances.

Its movements are slant,
To move vertical, it can't.
It gives you the pin,
Without realising it, you would do a sin.

Then we have the king’s dear one
The queen, as powerful as a gun.
It is the rook's and bishop’s joint.
Which is worth a nine point.

The queen can move in any direction,
Anywhere, in a nice fashion.
It's chess’s most necessary piece
If you want war and not make peace.

The most important piece is the king.
To its concept you should cling.
It moves in every direction by one block.
Which makes the king easier to lock.

When you lose the king,
It inflicts damage like a sting.
You actually lose the match.
The opponent gets his snatch.

And last but not the least,
The weakest yet the strongest.
We have the soldier (pawn) -
Which when reaching the opponent’s last line gets a new dawn.

The pawn is worth a single,
Its moving characteristics are triple.
It has diagonal chop, promotion and an initial leap,
In endgames, they are very difficult to reap.

So, that almost sums up chess.
The game that doesn’t make such a fuss.
The only thing you must have in your intellect,
Just, THINK before you act.