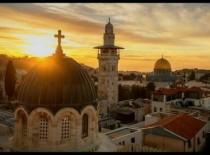 I urged the soil to foretell the story,

Of homes amid the dynamite’s fair,

And of life grappling to breathe fresh air.

From a paper figure with a golden aura,

To ‘His’ glory the lurid sun was succumbing,

When ‘this’ godhead appeared wearing a tiara.

“Don’t be startled, I am Moses from the bleak heavens!"

Exclaiming this he swayed his white robe,

Resting on the desolated holy land,

He began the story on a heart-wrenching note.

“It’s a saga of a land now sunken in blood,

For so gifted was Canaan that it resembled almost Eden,

With its fortune spreading wings in the sunshine,

Oh, Child! let me take you back to the time,

When all sang jingles of communal solidarity.

Where folks attuned to cultural harmony,

And preached that religion that caressed humanity.”

‘Moses’, asked I, ‘what curse has befallen on Canaan?

I see no Eden, no serenity, and faith!

‘’The once pleasant reality now seems a surrealistic myth.’’

Trapped in the manacles of inhumane filth,

“My Son, Canaan was exposed to Darth Vader,

Who played with faith as a gimmick, thus spurt division”.

Burning togetherness of Canaan in scathefire,

As states pendulating amid the political dire.

Cults rose and buried peace with the corpses,

With Jews and Arabs battling for their lands,

Over the wall of Jerusalem, the cults fought,

“Selling their religion as an indomitable brand.”

Looking at the animated upsurge,

Politics grinned sitting at the throne,

The weapon in massacre they employed,

‘’Twas shameful to see what religion could do all alone.’’

‘’Holy shit! It is to see bloodshed over holy land,

I abstain from such faith that makes holiness as hell!

How this Moses wish religion could’ve been apolitical,

And not the propagandizing sort that drives mankind to quell.”