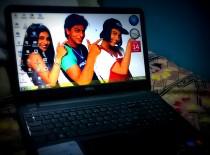 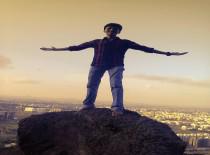 Since many days, I am alone at home.

Nobody calls me , what a waste even that phone.

I switched on the tv, there is "India poochega sabse Shana kaun."

But I want to watch movie with my popcorn.

I am so bored of apps like angry birds and flappy.

But thanks god, I have my lappy.

When I have my lappy, I am so happy .

I forgot the whole world and just drink the coffee.

It's time to watch  fast and furious 7.

I told him  buddy that movie is too old.

But he told me that old is gold .

we have decided: lets do the toss.

The one who win becomes the boss .

So we have did head and tail.

But oh god I am failed.

Now I have my lappy. But he is happy.

I forgot about popcorn and just eat the toffee.

After some hours, I want to listen to music.

I have played some songs of yo yo.

But my friend simultaneously said no no.

So I have cancelled my plan of music.

And thinking of another topic.

I have decided to watch some images.

It includes actors ,actress, their posters and poses.

I have started watching images of Varun Dhawan.

My friend said he wants to watch Amitabh Bachchan.

Once again I have cancelled my plan.

And thinking of him, how is this man?

Now I have my lappy. But nobody is happy.

I forgot the whole world and started to being choppy.

Then I have quarrelled with my friend.

Due to that reason, our friendship is going to end.

My friend is so sad & leaving my home.

After that , I opened google chrome.

then video is buffering & I am playing rubic cube.

Yet that video not started & I am feeling bored.

I shut down the lappy & placed it in cupboard.

Wants to call someone & I bring the phone.

I opened recent contacts & there is number of that friend.

I remember that moments, which we have together spent.

I felt guilty, because I broke his heart.

I decided to say sorry & lets do the fresh start.

I started my bike & reached his home.

I rang up the bell & here he comes.

Now I have my friend.

whose friendship is never going to end.