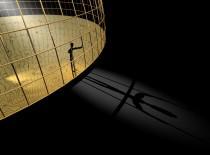 She opened her twinkling eyes, to see the light that shown.
She felt happy and thrilled, if only had she known.
She had heard it all inside the egg, saw it through her mother’s eyes.
She thought the world was full of love, of people humble and wise.

She chirped beneath her mother’s lap, unknown to the fears beyond.
She played, ate and rejoiced, singing the happy song.
She was growing wings day by day, she would soon be able to fly.
See the colors of nature all around, feel the spark which she had only seen through her mommy's eye.

And came the day when she was ready, to make that first astonishing flight.
All set to break the winds she was focused to reach the destined height.
She flew and flew high in the skies, leaving all her fears behind.
She flew across the mountains and bays, freedom conquering her mind.

And then suddenly she lost it all. Oh what was happening around?
She was restricted to move, leave alone fly; into the iron bars was she now bound.
She struggled and cried looking all around, but her mother was nowhere to be seen.
She was all alone in this dungeon of bars. With scary sounds that screeched her ears, and faces that appeared mean.

She missed her nest. The coziness and the cushion so warm.
She missed the subtle touch, the feel, of her mother’s comforting arm.
She struggled inside jumping up and down, only if someone would get her flying,
A weak little creation of the great God , sitting helpless there trying.

She was fed in the prison with the finest of grains, People said her master was nice.
But with chains in her toes and wings unworthy to fly, she could never take him to be wise.

It was glittery around, there was pomp and show; but something just was not whole.

She sang beautifully and people praised. But the melodies lacked her soul.

She spent her life accepting things the way they had always been.
The only way she could see the beautiful world now, was when asleep and in a dream!