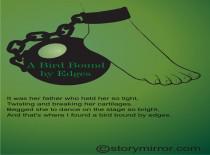 With her dancing shoes on.

She could hear the clapping,

Until the clap was gone.

Suddenly a hand held her tight,

And the music could be heard no more.

Her eyes were now in fright,

As now she could not dance any more.

It was her father who held her so tight,

Twisting and breaking her cartilages.

Begged she to dance on the stage so bright,

And that’s where I found a bird bound by edges.

She was reading her book,

Unaware of the surrounding atmosphere.

Diving into the deep oceans of the book,

Realized that her dreams are not anymore mere.

Until the book was torn,

And the basket of dreams was shattered.

Told that from the day she was born,

Her aspirations and dreams hardly mattered.

The burning smell invited her,

Out she ran near the hedges.

Told her that only kitchen is meant for her,

And that’s where I found a bird bound by edges.

His best friend sat in front of him,

He just couldn’t stop admiring her.

His other friends only made him whim,

But she gave him peace and shoulder.

She was there when he was sad,

And played her until dawn.

Every one thought that he was mad,

But his piano showed him the horizon.

Until his beloved was taken from him,

And he was static by life’s bondages.

Told that piano not the bistro is made for him,

And that’s where I found my bird bound by edges.

A bird bound by edges

A Bird Bound By Edges