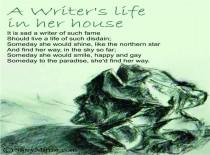 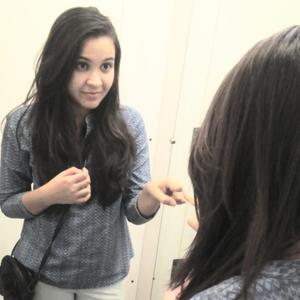 Thoughts that   came deep down, from the soul

Thoughts that   had made, so much known

A writer who wanted paradise

From her oblivion, one day, she would rise ,

Breaking the chains that held her back

She will live in the world, to complete herself.

Her work was praised, by people around

But nothingness only, in them she found.

Poems, quotes and stories she wrote

Were criticized greatly by   friends and foes;

They crushed her soul, and snatched her stage

Paid no heed to how much she wept

She still   went on writing   page after page

Pen and paper, she never left.

It is sad a writer of such fame

Should live a life of such disdain;

And find her way, in the sky so far;

Someday she would smile, happy and gay

Someday to the paradise, she'd find her way.

Writers Life In Her House