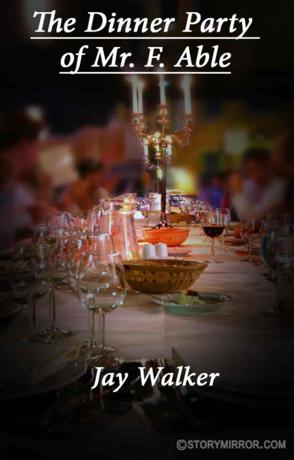 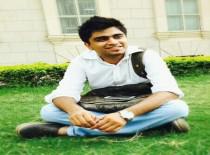 Nine hours of mortal sleep, after which I woke eternally

The warm comfort of the tomb had been lost quite drastically

The cord of the dream had been cut with ease, that false awakening,

And up I get now, to face the fading reality.

He should've known for him, I'm not quite ready yet

But still, he slipped through the door, the purpose of his call

"Invitation to the dinner party of Mr. F. Able" was scrawled on the Scroll.

A man for parties, I was not, but about the very able Mr. F. Able,

I had heard a lot.

About the time, I enquired from the Scroll, "Whenever you're ready",

was all it had got…and still I was quite not.

Will She be there ? I heard myself ask. The only way to find out.. ?

To give a response to the task.

So I finally slipped out that rainy night, a black suit I had worn

Wishing the rain had taken a rain check and not met with my scorn.

Through the hot gates I entered with the invitation,

to the dinner party you feel uninvited to, walking in

for the Grim Reaper.

What first caught my eye was a sight that filled you with delight.

To Mr. F. Able's greatness was built something much spectacular,

than a snake slithering down a vine, a seat which was worshipped,

like a shrine. The august throne sat blazing and glowing with a colorless shine.

I had brought books with me, for they were best for me

for company. I felt like a square in a round table,

where and when everyone was around.

The tube light in my corner had been exhausted

as its life flickered away, much to darkness' delight.

It needed replacing, a bulb was being arranged, it makes its way,

as a new challenger await 'cause the shadows won the last fight.

The West wind walks in through the windows, much to the

dismay of the fans. They question who they are to march in,

Women came in with their sons and lovers,

which was which, it was, at that time,

And Men ? They came alone.

The music was dull and dragging,

with sagging skin, and the lady, on her piano,

The waiters were more smartly dressed than me,

serving oysters and sea-shells with honey.

Ignored was the man in the corner, that was I..

Let alone the waiters, even the food refused to meet my eye.

Before eating, people washed their hands with soap,

in hope, that their guilty conscience it will cleanse

some washed them after a handshake,

with their supposed friends.

In the huge room, people come and go

Talking of Eliot, as if him they know.

When you glance around the room to see who's keeping

you company, and your eyes fall on the next seat…empty,

except being occupied by your own shadow, and you smile…

what better company to keep than thine ?

Für Elise was in full flow, when couples took to the dance floor.

Arms holding each other close, refusing to look in the eye,

of the very lover they hold. Quiet glances and guilty smiles,

were passed to the man and woman who they had actually enticed.

The dancers were separated from the dance, when offering the seduced one

a quick glance, led to the falling of the mask. Fair enough, a facade was needed,

to hide the hollow eyes, that couldn't relay the handsome lies,

But, to their credit, quickly was put on, another guise.

And I..I sat with Milton who saw light in a blind alley.

What he had lost he never regained, and even he,

failed to justify Mr. F. Able and his ways.

And still, in the huge room, people come and go,

talking of Eliot, as if him they know.

But I ?  I thought of She..She who screamed in silence,

She..who weeps in giggles, writes on sky and laughs in peace..

Mr. F. Able had busied himself with Kings and Queens,

to measure which side was greener.

A number of nobles, questioned the authenticity of his meanings,

without much ado, they were shown the door, along with their feelings.

The food..the food that leads the division amongst the divided

was not to everyone's liking. Those who were the men of the sea,

were served with dry gravy, and those who ate the chicken and the bone,

were gifted with salad and some water, no more.

And soon pipes came out, and with that came out the cards.

But the Jack of Hearts had lost its trade. Beaten by the Queen of Diamonds,

at its very own game. What future holds now for this pack of cards,

where the Queen of Diamonds is the new Ace of Spades.

And thus, I was reminded of She, who had my heart

and with my heart she had me.

eating habits, I'm sure they discussed. No poppy of the O.P

to be served, had them stressed, without it, Kubla's Xanadu and

the Abyssinian maid would be hard to reach, the former confessed.

The lights gave away, the tube light and the bulb had lost the way

the shadows won again, as panic broke out amongst the divided,

and no Mr. F. Able to go to, that much was plain. But eventually,

a fire was built, and his throne, Mr. F. Able, again reclaimed.

And they finally served me soup in an urn, this much I had earned.

In it I tried to drown my sorrows, but my sorrows started to swim,

in the form of The Flea, who, after tasting the soup, it, it spurned.

Another irrelevant day had come, to celebrate a life that hadn't,

been lived right and suddenly Oscar Wilde appeared with Albee

in his arms. They discussed the importance of being earnest,

when you're afraid of Virginia Woolf, as she's the sternest.

But why am I here, when there are no eyes here.

I felt more used than the Use Me that was kept on a shelf..

I soon realized, about Mr. F. Able, how mortifying it is to be so

crestfallen of who you are that you repel even yourself.

Cometh the nightfall and Mr. F. Able disappeared, and now even

Maud had gone. The fire had burnt, no lighter was found,

again the panic broke out. Was Mr. F. Able, so unable ?

How come the host left the guests so unstable ?

I took out the Invitation once more, gave it a look,

and threw it on the floor. My name was present on the Scroll,

It had been written in bright colors of Black and Blue,

I had been invited, it was written, and Death shall die before words do.

I took my seat again, wondering about the Host that left,

The Invitation by him had been sent,

Is he a unicorn amongst us black stallions,

By leaving after the dark, on his words had been put a dent.

But from my seat, I shall rise and to my bed I shall eventually fall.

I remember meeting Him, Mr. F. Able, in a broken dream after the nightfall.

The rain had been abandoned,

as the guests came together to form a new host

Our shadows danced in the dark, giving us a new hope,

But it is the hope that kills, for it prolongs the torments of a man,

Still, we hoped against hope, that after this star-less dark night,

eventually, the Light would fall and one day the Sun shall rise.