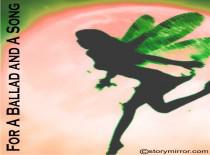 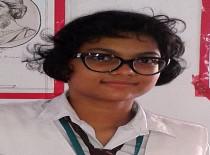 (I) In the placid  shallows,

of a stormy, lonely lake;

weaving fearful shadows in their wake.

she calls the woodland creatures forth;

Some come dragging, lost in a pall of gloom,

Others skitter in their momentary mirth.

Lucy tells tales in the twilight

And many a roll of laughter rack

the animals; Yet oft they

wipe their tears, and trudge home back.

The girl of the lagoon often sings songs,

and charms the sleepy bees,

She sings when the birds are born

And oft sings their final lullabies.

Today something was different, though,

Lucy resolved to tell the chronicle of her life;

Excluding that part about embroidered doilies,

She wove a tale of love, suspense and strife.

(II) Lucy was the daughter of a poet-king,

She was the fairest of the land,

Yet poetry and jewels were not for her,

She practiced swordsmanship on the glittering desert sand.

Many a noble begged her hand,

She bested them all in combat;

Unfortunately, she spurned a knight,

Whose liege lord was a princely brat.

The brat was crown prince to savage Silverstite,

Spluttered out the refusal to his sovereign

and that it was an insult to his suzerain.

Enraged, that brat's mother the queen,

Thought on how a kingdom to gain,

under the reason of avenging the insult,

Scheming, she sent her son to the thrashing river down.

(II) Lucy found the prince in the moaning river

Unknown was his true identity,

She healed him and kept an eye;

And to her despair, learnt she was getting senty.

Obviously, the faceless man and Lucy,

Began to fall for each other,

So Lucy in love brain-stormed

How to break the news to her father.

Lucy had once vowed to marry,

the man in combat she could not beat

Lucy and her lover had

And how the sparks flew when their swords met!

and so did her lover;

The match was a tie and the

wedding knot was to be tied by the river.

Yet in the imperial court a tumult arose;

"The bloody queen of Silverstite had

declared war on their Gravenrose!"

The wedding fled from Lucy's mind,

It was time for her to fight;

Yet the king, her father, gave not

comfort in the arms of her lover;

She looked for him everywhere, at last,

found him, weeping, under a shady bower.

was heir to the bloody queen,

Enraged, as she was, she agreed,

to leave with him, to escape, unseen.

(IV) Her prince left her in the care of an old forester,

the simple shepherd turned out to the knight

Fulgrane, yet Lucy had not been taught to

give up without a fair fight.

Mocking, Fulgrane told her of the prince's betrayal,

Not believing, she slew him with a kitchen cleaver,

And calling out to her prince, Lucy

ran up the banks of the subdued river.

a little further upstream, and o'er heard the Queen,

conversing with her lad, "Both Lucy and the king

done away with, the battle will now be won clean."

She returned to find the king dead

Melancholy, donned her armor, led the soldiers into battle and filled the enemy with dread.

(Everyone lauded the warrior Lucy

Cheered the army of Gravenrose wiped the floor,

with the evil queen and her son sinister.)

The warrior princess was nowhere to be found;

They found her intact armor,

Her steed nickered, alone, on the battleground.

Looked brightly into the lagoon's waters,

and fervently wished she was far

from dead lovers and dead fathers.

The waters welcomed Lucy in its bosom

And there Lucy remains till date;

The animals could not comprehend,

Cause betrayal, hatred for them doth not exist

Now the sun rose, and the animals fled

into the forest with the vanishing mist.

(Every dawn, when time stands still,

and even the reeds maintain silence)

and wished as she did for centuries,

She could return to purgatory,

Then  back she went to the calm, clammy lake;

All but a ripple was left,

And a soft moan soon lost in the breeze.

Even everlasting sleep was welcome

And then as forever, in the new-born morning,

On the pristine water swam the ignorant

They did not know what reposed in the depths.

A pretty creature I

flit among the roses,

and butterflies sliding on cool breezes.

The handsome human prince of my heart

I hold for you the pixy light,

I hold your hand and prance along

I warm you in the wintry night.

You were burned when winter shifts to spring,

I, an ethereal sylph you, human,

yet my love for thee was true to me.

I and my brethren

yet I fell in a love futile.

Ours was a happy life,

Autumns and Summer in the orchard

and Winter with the does.

Yet you had to go,

and rescue the baby goat

Your fatal mistake left me weeping

by the meandering moat.

The kid pranced away

and browses daffodils till late

but I am still holding onto you

willing you back from Heaven' s Gate

I will not let you go

I swear the sylph spell in the race

ascend you to ethereal skies,

then let thee descend to the airy base.

The breath of a sleeping fairy child,

and a fairy death song have I brought,

I shall wake you once more, but what

you do, remember me not.

Be born again on the mortal plane,

and away from the forest shall you stay

willingly I sleep, but the elves won't

believe, and hunt you by the day.

In exchange for your life,

I give mine and your memories,

try not to remember, lover

I give all to the Lady of the trees

Be born again, my one and only

unlike mortals, you once saw more;

but never again will trees whisper to you

Love is a precious thing

dearer than my lowly sylph life,

for me, that shall remain unsolved.

Yet always love, my lover

but never venture into the forest again;

not to taste Autumn's sweet fruits

and never in calm cold Winter.

The Summers you will pass in human lair,

and there will be neither of us to welcome in Spring

the fruit from the womb of the Pegasus mare.

And never again will I be found,

singing with the maidens of the sea

making merry with the dwarves,

remain happy, my love, but do not remember me.

The sylphs are a jealous race,

so be  no longer a forest heathen

stay away from my home

for there will lurk my bloodthirsty brethren.

Now come back to me, my love

look into my eyes once more,

before I find the eternal shore.

Each spell I recite

all I can say, goodbye my love,

and I hope I have done no wrong.

Each word I speak brings me

closer to the brother of sleep,

love you may my prince,

but for me, never weep.

For A Ballad And A Song