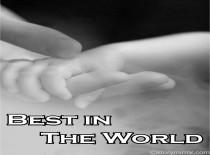 Who can be considered most superior in this world

On whose prophecy there won't be any doubt

Yes, this is the best, everyone would yell it loud

Someone may be fantastic in any game

Someone, maybe a prolific writer

But he may fail in an attempt to write tidier

But he too has a weakness, and can be killed by an ant

Someone may have facts piled up altogether

But wisdom is not something which you would seek rather

Someone, who is perfect, someone who is ever ready

She has that preciseness, you see in the art by a potter

She is an embodiment of tolerance

And personification of romance

She has the power to make the strongest of the strong

And those guts to make right who is wrong

She is the first teacher, who gives the world knowledge

She is the first school of humanity, she is god's college

She is a perfect writer, as she starts the script of a life

So if you want to know who is Best in the world??

"Mother " holds that preciseness, the only beauty in this world

Best In The World