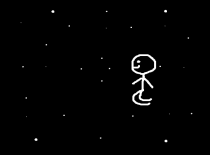 When in this universe, was there nothing,

When all light was dark, when all matter was ---- empty space...

Waiting for someone to come, accompany me.

And yes, changes did happen,

There was the big bang... Mass was formed.

There were stars, there were galaxies... what not?

How beautiful it was, the story of a growing planet.

Then, there there was life.

How thrilling the feeling was,

From the tiny microbe, to the Argentinosaurus...

From the coulourful flowers, to the colourless jellyfish.

Then ! Then it was the end.

Nothing is left, except for me,

All alone I stand again now,

With just memories in my mind,

For such a creation, to occur again !

The Story Of The Eternal...