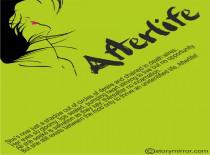 Now no one tracks the spirit

That roams among the mob

Who's trying to get through but every time, unable to.

Sitting between their laughter, cold and numb.

No one can see the pain and agony.

Their happiness is pinching badly.

Flashbacks of days of life, filled with joy which soon died.

a furious swing of wrecking ball smashed it all.

Stabbed brutally and so died.

Soul emerged out screaming; with no noise.

She's now just a shadow out of circles of desire and chained in death wires.

Her eyes so gloomy, lips sealed, pumping heart striving to live but no opportunity.

All she seeks is salvation as they say; thereafter no incarnation.

But she still exists between the mob only to thrive an unidentified life, Afterlife!