My Mother.....The Most Beautiful Woman In The World.

My Mother.....The Most Beautiful Woman In The World.

It was the summer season. Anyone staying in Mumbai will know how the humidity builds up and how hot it becomes during this season. In the sweltering heat, Ganga was tagging her daughter Maya along with her. From the time they had started from home, Maya kept on nagging. She wanted her mom to buy her a lot of stuff but was not able to understand that most of the things that she was asking for, her mom couldn’t afford to buy it. They lived in Kalyan a suburb of Mumbai and had come to Dombivili to be a part of the celebrations at the annual Gaondevi fair. The suburbs of Mumbai had now become too crowded due to the cheap housing facilities it provided. Ganga sold Sindhi papads in the local train for a living. She had to struggle for a living. Her earnings were meagre and most of it would be spent on paying the house rent, paying bills, buying food supplies. She had nothing in the name of savings. She would dread to think what she would do in an emergency. Pushing these thoughts aside she decided to enjoy at the fair. As it was every year, a sea of people had emerged at the fair. Vendors and hawkers sitting on the street sides were making a quick moolah. Ganga could smell food and a hint of sweat in the air. The thought of selling fried Sindhi papads garnished with chopped onion and tomatoes at the fair crossed her mind. Next year. She promised herself that she would do so next year. Her daughter deserved a better living and in order to provide that she needed money.

Ganga had a bitter past. She had escaped from the clutches of a drunkard husband and inhuman in-laws and had come and settled down in the suburbs of Mumbai. They used to torture her for giving birth to a girl. Taking the help of the police she had got rid of those people. Being a single parent, bearing the brunt of low caste society people had become a way of life for her.

Pushing the sea of thoughts away from her mind she went inside the temple. All the while she clutched Maya’s hand tightly. Wading through the waves of the people, finally, she was successful in seeking divine blessings. Content that she could get darshan of the goddess she made her way out of the temple.

Her daughter who till now was cribbing about walking started looking around her with interest. All the things that she wanted- balloons, hair bands, hair clips and an array of other things were kept for sale on the streets. With her eyes almost popping out of their sockets, Maya kept on looking at the things that were kept for sale on the footpaths. Ganga, on the other hand, was snaking her way out. On the way out she bought a few accessories and toys for Maya. While buying the toys what caught her eye were the beautiful glass bangles. The vendor had kept them neatly arranged on a wooden plank for sale. A rainbow of colours was on display. You name it and the colour was there. She sat down to have a good look at the bangles. After all glass bangles would be just a few rupees. After having a good look at the bangles she picked the royal colour. She just couldn’t resist purple at any time. She wore a few bangles and looked lovingly at her hands. Finally, she bought a dozen of them. The vendor packed it neatly for her in a newspaper. Happy with her purchase she stood up. “Maya,” she called. Her daughter who she thought was standing there all the time was nowhere to be seen. In desperation, she started loudly calling out her daughter. She hollered, she cried but to no avail. She cursed herself for her inability to buy a smartphone. If she had it, she would at least have had her daughters photograph in it. Her daughter was not there. This was a reality. A steady stream of helpless tears started rolling down her cheeks. Had she lost her only child in the fair? In desperation, she started asking strangers about Maya. She felt so helpless. After running around for quite some time and not finding her daughter, she just broke down and sat on the street helplessly. A strange fear gripped her heart. Helpful strangers in an attempt to help her suggested going to the police station and getting help.

Maya in the meanwhile had met a kind gentleman Mr Phadke who kept on asking her for her residential address and phone number so that he could drop her to her parents. But the kid couldn’t tell any of it. She repeatedly kept on telling Mr.Phadke that her mother’s name is “Ganga” and that her mother is the most beautiful woman in the world. The thought of taking the young girl to the nearest police station had just cropped into his mind. He felt that the police would help him in reaching the girl to her mother. With the decision made, he started walking towards the police station. On the way, he heard some announcements on the public announcement system. Like a flash of lightning, an idea came into his mind. Why not use the announcement system for finding the girls mother. Cutting his way through the crowd he finally reached the place from where the announcements could be made. It was a small dinghy room with a mike inside it. A portly looking man was sitting on a broken chair scratching his cheek. Mr.Phadke very politely told him what the matter was and asked for help. The man gave him a look, nodded and announced on the mike that a Mr.Phadke had found a small girl aged about four to five years. Her name was Maya and if anyone has lost their baby girl then they should make their way to the announcer's room and pick up the child after proving their identity.

Ganga who was till now sitting dejected heard the announcement and couldn’t believe what she had just heard. The announcement came once again. She had heard it right. It was her baby. She ran like wildfire to the announcer's room. Upon seeing her, her daughter just ran and flung herself into her arms. They hugged each other tightly and cried.

Mr.Phadke was just looking at the scene with his mouth wide open. What he saw was that the girl was hugging a woman who had a tetrahedral nose. Her eyebrows were bushy and there was an enormous wart on her cheek with a disarray of teeth in her mouth. “The most beautiful woman in the world,” he smiled. Someone has rightly said, “Beauty lies in the eyes of the beholder.”

Indeed the most beautiful woman in the world.

Seeing the love and affection between the duo Mr.Phadke was happy he could help the little girl find her mother. Content he quietly left the place. 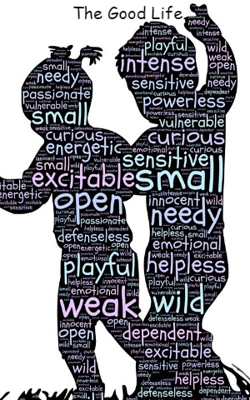 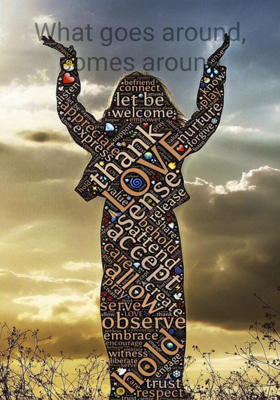